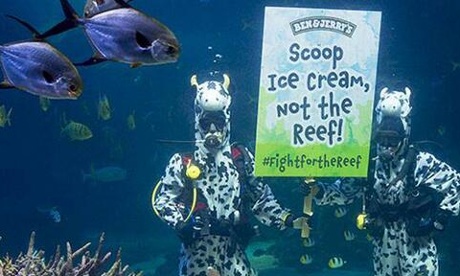 Ben & Jerry’s has joined the World Wildlife Fund and others in a campaign to prevent further dredging of the Great Barrier Reef.  Officials of the Australian government aren’t happy — in fact, they are calling for an investigation of the company that might result in fines.  But a newspaper poll released the same day indicated that most Australians liked the company more for speaking out.  And this photo (from Ben & Jerry’s) is too good not to share.