Free Cone Day and The Soul of Ben & Jerry’s 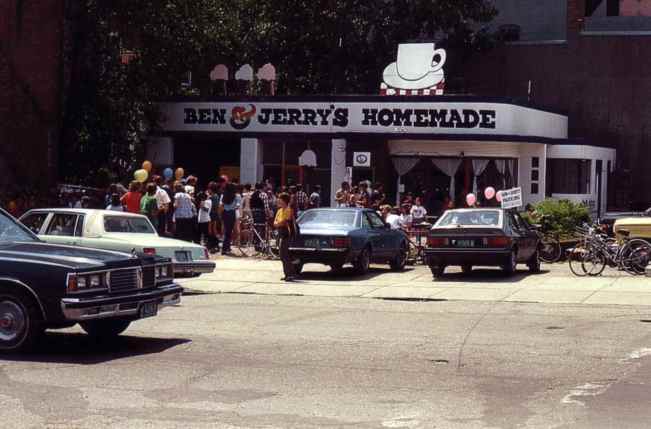 On Tuesday, April 8, 2014, every Ben & Jerry’s store in the world will give a free ice cream cone to anybody who drops by. The photo above shows their store in Burlington, Vermont on the first annual Free Cone Day in 1979.  The text below, adapted from chapter two of Ice Cream Social, explains how the celebration got started and why it goes to the soul of the company.  Read to the end to find out how to win a free copy of the book!

Ben Cohen and Jerry Greenfield spent the winter of 1977-78 freezing their butts off in the shell of an unheated gas station in Burlington, Vermont. They had rented the abandoned structure and were demolishing, framing, and finishing it to operate as a food stand. At night, they huddled around a wood stove in a poorly insulated house, living on crackers, sardines, and test batches of ice cream they cranked themselves. Their big idea was throwing candy, nuts, and other tasty stuff into the smooth chocolate or vanilla mix when the batch was partially frozen. This was a fairly new idea back then, and the results of their tests were often unbearably delicious. Of course, selling a frozen dessert in a place as cold as Vermont might not have been the smartest business idea, but they didn’t have an alternative plan.

Ben and Jerry liked having fun and helping others have fun. When the first Ben & Jerry’s scoop shop opened in May 1978, the board that listed their flavors described them as “orgasmic.” Later, they switched to “euphoric.” The point was to have days full of positive personal interactions with employees and customers. They wanted to make enough money to live on while they enjoyed themselves. They didn’t make any profit in their first year, and in their first summer, they slept in the store. But they stayed in business.

In May 1979, to celebrate the anniversary of their grand opening, they spent a day giving away ice cream to anyone who showed up at the store, including dogs. The line went out the door all day long, and Don Rose, a friend who played boogie-woogie piano, tickled the ivories in the store for twelve hours straight.

Fred “Chico” Lager, who owned a bar down the street and later became the first President of Ben & Jerry’s, remembers that day in his entertaining memoir of the early years, Ben & Jerry’s: The Inside Scoop. He says that flyers announcing early Free Cone Days were decorated with quotes attributable to each of the founders: “Business has a responsibility to give back to the community,” from Ben, and “If it’s not fun, why do it?,” from Jerry. Throwing parties by giving away huge amounts of inventory was not a full-blown social mission, but it wasn’t business as usual, either.

Every day would have been Free Cone Day if Ben and Jerry could have afforded it. They went into business to have fun, and they believed that the joy was in the journey. “We knew that we would only remain in business through the support of people in the local community,” Ben said in an episode of the television show Biography that first aired in 2006. “I liked the idea of free ice cream for the people.” And the Free Cone Day tradition continues today, although dogs are no longer served.

Free Cone Day goes to the heart of what makes Ben & Jerry’s special. Chico Lager writes, “Ben and Jerry came to describe their business as being ‘funky,’ which to them meant honest, no frills, hand made, and homemade. It was on the opposite end of the spectrum from slick, refined, polished, or packaged. It was as much a description of themselves and their emerging business philosophy as it was of the physical surroundings or graphic image. . .

“Caryl Stewart, who was subletting the gas station to them, recalls, ‘they had connected with their customers, who felt like they were an integral part of what was happening, not merely a source of revenue to some faceless businessmen. Walking into the gas station was very different from walking into any other retail establishment, getting what you needed, and going. There was a sense from the beginning that this was something special.’”

Enter to win a free copy of Ice Cream Social!  Leave a comment below telling us your favorite flavor of Ben & Jerry’s ice cream, then share this post on Facebook.  We will mail one randomly-selected reader a copy of the book at the end of the month.