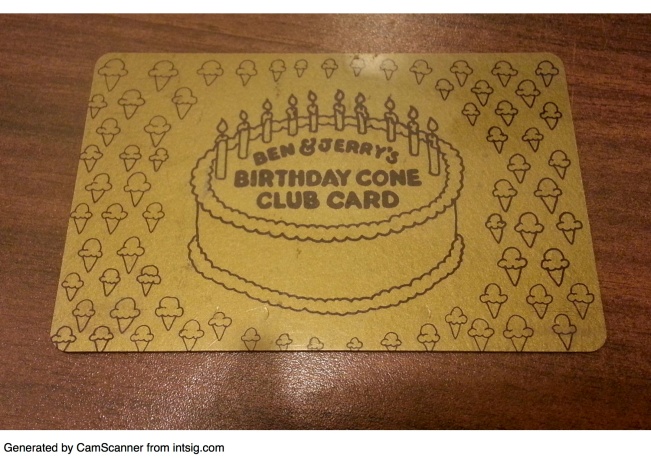 On Sunday, our friend Diane sent this:  “Before reading your book, my favorite Ben & Jerry’s initiative was the ‘birthday club’ card (see above). Who doesn’t want ice cream on their birthday? Soon after we moved to Troy, New York, we discovered that Ben & Jerry’s had opened an ice cream shop in Albany. There were applications to join the birthday club. So, Tom and I joined. We never really got to take advantage of our membership, until we moved back to Sarasota. When we remember, we go into the Ben & Jerry’s shop on St. Armands Circle, show them our cards on our birthday, and they always honor it, even though I have yet to come across one employee there who has ever heard of the club. Today was Tom’s birthday and we made a quick stop in to Ben & Jerry’s.”

Brad just happened to be in Albany last night, to give a talk about the book.  He showed the card to Rich Wilson and Michael Sperduto, owners of the stores in Albany and Troy (just across the Hudson River), who had kindly agreed to treat the crowd to free ice cream after the talk.  The card got an appreciative nod.  “That’s old school,” said Rich.  “We used to give those out before everybody got e-mail.  Respect.”

So hang onto your golden tickets, Tom and Diane, because Rich says that any shop will take them.  And if you don’t have a ticket, Ben & Jerry’s will still give you a free cone on your birthday.  All you have to do is sign up for ChunkMail, their online fan club.  You’ll get news, such as the date of this year’s Free Cone Day, when everybody gets free ice cream. You might get the chance to taste-test new flavors before they are released.  And you will get a ticket, online, that you can redeem for a free cone at your favorite Scoop Shop on your birthday.  Maybe it isn’t as cool as a golden ticket, but the ice cream will taste exactly the same.